Charles has had a rich, fulfilling life of travel, pilgrimage, theology, fatherhood, and grand-fatherhood. He even owned an orchard for a time.

Pictured above: Charles is proud to be an Aston Martin club representative, and sports the appropriate attire to prove it.

Cars have been Charles' passion ever since he can remember. His interest was first ignited when he hopped into his Aunt Grace's Chrysler.

"We would go to the Vic Market on a Saturday, in my aunts 1920's American Plymouth Chrysler – it was a square one with a pull-down luggage rack at the back, and it was great FUN!" he says.

Charles saved his pennies and bought his first car as soon as he turned 18. "I couldn't afford brand new, so I bought an old car," says Charles.

"It was a 1926 Lea Francis. The car was made up of components from several manufacturers, and then all put together, like Frankenstein's monster."

This 'old car' still had flair.

"It was a family soft top, with seats for 4, and a convertible," says Charles.

Charles has owned many vehicles over the years, including a Trojan Truck with a strange engine set-up. However, his true love of Aston Martins began with a 1954 model, and his family got involved in the fun.

"It was a brilliant looking car – quite fast," says Charles. "It had two good-sized seats in front and two smaller ones at the back. My wife Carolyn enjoyed driving the kids to school in it."

Charles' next Aston Martin was a real race car.

"Aston Martin raced three cars at Le Mans in 1951 – and the team beat Ferrari!" he says.

"My car was one of the team prize winners – it didn't come first, but it was a significant win."

With a history as incredible as this, Charles couldn't resist purchasing the car. And after a bit of work, he had a great time racing it.

Charles enjoyed driving and improving his Aston Martin so much that he became the Victorian representative for the worldwide club.

"We were members for many years, and eventually they made Carolyn and I life members," he says.

During a trip across Europe, Charles had what he calls his 'near miss.'

"I took the car to Europe with the club. We were going from Switzerland and across to Italy over the Swiss Alps," says Charles.

"We weren't going desperately fast, but our brakes were getting tired and hot from the constant braking as we descended, taking on sharp bends in the road," he says.

Trucks were coming up from Italy, one behind the other like a train, so the opportunity to overtake didn't exist.

"We were on the edge of this mountain, travelling on the right, trucks coming up on our left. The opportunity to make the corners straighter by going over the line, just wasn't there.

"So, our brakes were overheating, fast!" he says, "it was terrifying!"

Saved in the Nick of Time

All was not lost for Charles and his crew. A much-needed rest stop appeared at the 11th hour - just like in a Hollywood film.

"All of a sudden there was a break in traffic," he says.

"We were finally able to go up a hill on the right - and with some light braking, we stopped at the top of the rise.”

So when in Rome (or the Swiss Alps,) do as the Romans do.

"This rise supplied a corner, common in European countries - where you could stop and pray – so that's just what we did. We stopped and prayed!"

"This was my defining moment – my near miss," he says.

Pictured above: Charles shows his photo album filled with photographs of his racing history. In this photo, his Aston Martin was photographed while it was being prepared for Le Mans 24 hour race, "Aston Martin raced three cars at Le Mans in 1951 – and the team beat Ferrari!" he says. The photo was taken before Charles took ownership. 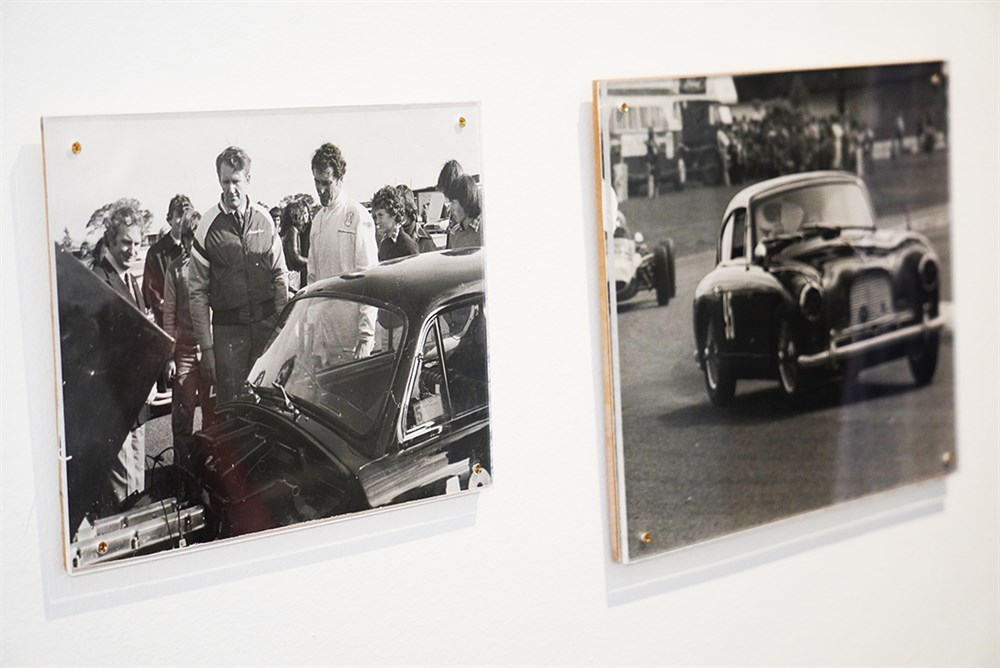 Pictured above: The beautiful car Charles and his wife enjoyed zipping around in, and taking for picnics with the family, and dropping the kids off at school,

“My first Aston Martin was a 1954. It was a very smart looking car – quite fast – a V6 with about a 2.5l engine. It had two good sized seats in front and two smaller ones at the back, so Carolyn enjoyed driving the kids to school in it,’ he said.