Lorraine and Rex have Australia covered!

Lorraine and Rex have Australia covered!

Mayflower Macleod welcomed two very well-travelled residents to its leafy village earlier this year, when Rex and Lorraine Marshall decided it was time to put down some roots after more than 12 years on the road.

This delightful couple, originally from Sydney, first met in school when Rex was one year ahead of Lorraine. But they didn’t become sweethearts until a few years later when they were both volunteering for a group that provided support to children living with disabilities. They have also both been volunteers in the fire brigade in Sydney and southern New South Wales.

Rex and Lorraine were married in 1968 and will be celebrating their 50th wedding anniversary in May. Soon after marrying, they moved to Cudmirrah which is located close to Nowra on the New South Coast and is about 200kms south of Sydney. Attracted to the idyllic lifestyle, Rex and Lorraine bought a brand-new house by the beach and will proudly tell you they were the 12th household to move into the area!

In 1992 the travel bug took hold. By 2009 they made the bold decision to sell their home and dedicate all their time to travel. Rex says it’s the best decision they ever made.

“We wanted to travel everywhere – and we did,” says Rex. “We have been down every dirt track in Australia. The only exception is the Canning Stock Route which is only accessible via a very expensive organized tour.”

Rex and Lorraine have covered more than 400,000kms including:

They have also been to all the furthest points of Australia including Cockle Creek (at the bottom of Tasmania in the South), Steep Point in Western Australia, Byron Bay in New South Wales, and Cape York in the Northern Territory.

One of their favourite places is the Kimberley. Rex witfully recalls travelling down the Gibb River Road and visiting Winjana Gorge National Park with hardly a person around.

“You could go five days and never see a soul.”

Rex and Lorraine believe that having good health was key to safe travels. They had medical practitioners located across Australia, keeping an eye on them. Every year they would go to the doctor to have a thorough health check to help ensure they didn’t get caught out the back of Bourke in poor health.

Making new friends added to the experience, with Rex and Lorraine spending a lot of their time with friends they met along the way.

Last year Rex and Lorraine decided it was time to put down some roots and chose Melbourne for their new home, so they could be close to family. In particular their two nieces as well as Rex’s sister. Their friends were doing the same thing.

Of the five close friends that they made along the way, all have now decided that it’s time to embark on a new stage of life.

“The number of grey nomads has increased dramatically over recent years, and it just wasn’t the same anymore. The roads were getting more dangerous and the cost of travel was going up,” says Rex.

“Fuel in the outback is very expensive now and mining has taken over many of the free campsites we used to visit so it was getting harder to find a spot outside of a caravan park.”

Rex and Lorraine moved to Mayflower Macleod in January. They had no furniture but were amazed to get a lock-up garage, as these were far and few between in other villages they visited. Rex says that he liked the village straight up, and are enjoying getting to know their neighbors.

Rex admits that both he and Lorraine are missing the travel and staying in one place is going to take some getting used to. But they are very grateful that they have been able to experience a life most people only dream about and enjoy it all together.

“We are happy. We have been all over the place and met some lovely people.”
“We love Australia. We love everything about it. So many people travel overseas and have not taken the time to see the beauty in our own backyard.”

Their only worry now is how to acclimatise to the chilly weather that’s coming as Rex and Lorraine are usually up north by now. In fact, this will be their first winter for 12 years. Rex says they need to get to the shops to update their wardrobe – he only has one pair of trackies. 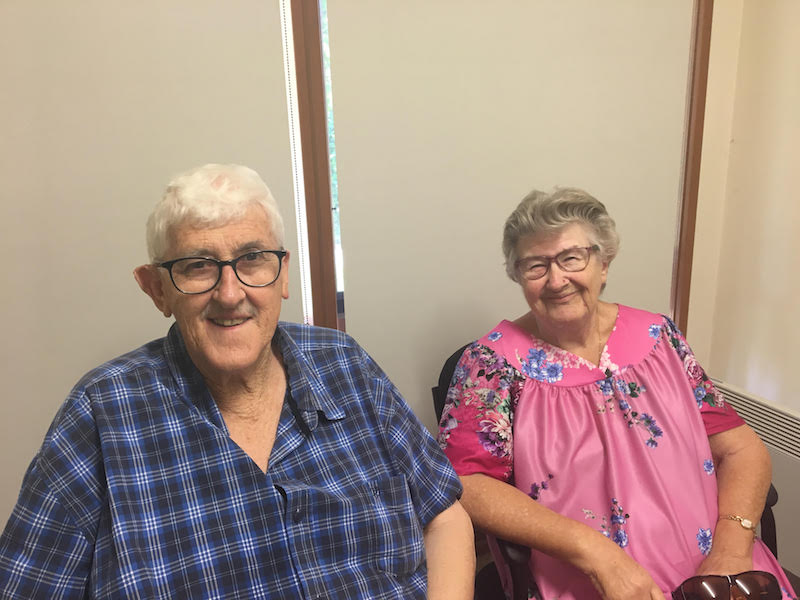